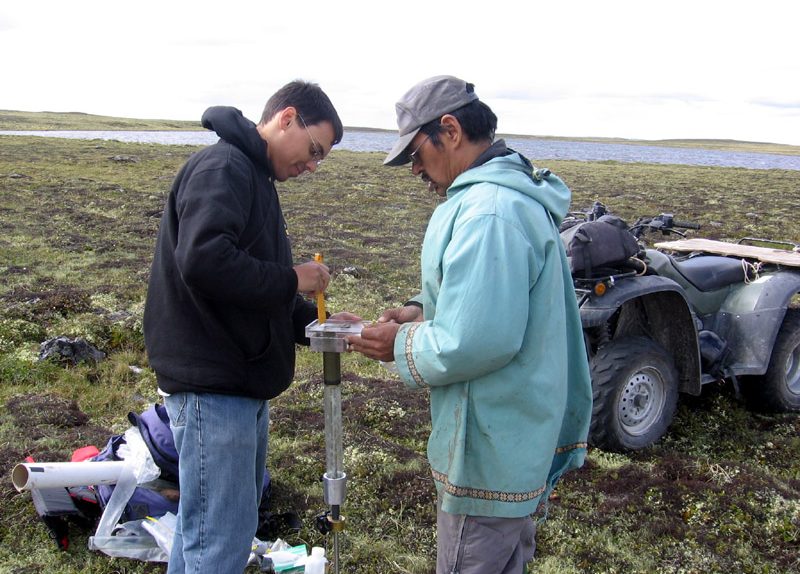 Can we use sedimentary deposits as the baseline to compare to contemporary indicator communities as a quantitative marker of environmental stress?

The utility of bioindicators is a means to qualify the environment without specifically having open-ended multi-year monitoring studies. The examination of the bioindictor allows for an inference of the environment, which can be related to past conditions by comparing the living biological community to the subfossil community through sediment core analysis. Detailed studies of biological indicators (such as chironomids; Diptera:Chironomidae) have generally been either restricted to single lakes, or span large latitudinal gradients. Moreover, the vast majority of paleolimnological studies focus on a single primary environmental factor, and often consider other environmental stressors as ‘nuisance gradients’. While recent studies (mostly my own) have focused on large collaborative initiatives to harmonize the taxonomy of Arctic invertebrate bioindicators and their relationships with the environmental. While some research has taken place on understanding aquatic biodiversity for potential biomonitoring of northern environments (mainly my own), there are currently no quantitative indices of impairment that have proven successful in northern ecosystems.

The application of the Reference Condition Approach has been utilized to detect the influence of mining activity in the Yukon (Bailey et al. 1998), but there is currently no quantitative index to measure or monitor this influence as exists in southern temperate systems. I intend to develop a quantitative means to detect and assess ecosystem impairment utilizing biological indicators for northern environments.

By examining both direct and indirect effects on bioindicators from this operation, my research program attempts to quantify the deviation of bioindicators from the baseline assemblage determined through sediment core analysis. Through a partial dependency analysis (examining the variation explained by singly constrained environmental factors), I  quantify the effect of resource development on specific bioindicators. From this we hope to be able to not only quantify the effect of a particular environmental stressor, but also establish a conservation marker for future monitoring and/or restoration of specific bioindicators.

Our baseline knowledge of northern aquatic ecosystems is often extremely limited and site-specific, forcing many studies to draw conclusions assuming overarching affects between environmental conditions and biota. Few studies have attempted to validate these assumptions by directly examining the connections between proxy indicators and environmental stressors. Likewise, while qualitative biomonitoring approaches clearly identify the utility of using biological indicators to infer ecological impairment, none quantify these effects for northern regions. As resource development proposals are often in northern regions where we have little to no baseline knowledge, there is a fundamental need to be able to quantify potential ecological effects, as well as identify potential mitigation and restoration measures. Dr. Medeiros utilizes multiple transdisciplanary approaches to quantify the relationship between biological indicators and environmental gradients;