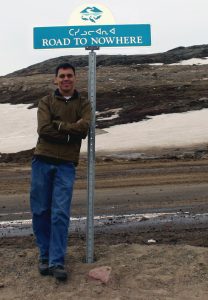 Professor Medeiros is an expert in freshwater ecology, biogeochemical processes, and Arctic environments. His research focuses on the use of biological, hydrological, and geochemical indicators to examine responses to environmental change in northern ecosystems; past, present, and future. This is applied through the examination of gradients of ecological condition (e.g., climate change, ecological sustainability, anthropogenic disturbance) over large spatial and temporal scales. His research on the evolution of northern ecosystems over the past 10,000 years allows for predictions and modeling of future responses to environmental change.

Positive water balances in northern regions are an essential component for a multitude of ecosystem services, as well as for access to clean and available freshwater for northern peoples. The consequences of polar amplification of warming include a longer ice-free season leading to increased evaporative stress on lakes, and reductions in winter precipitation that can lead to reduced snowmelt contributions to lakes and rivers. This has led to water availability becoming a growing threat to northern ecosystems, especially in the drier summer months. Water quality is also a fundamental concern as planned growth and expansion of several northern communities is expected as local populations grow exponentially, and industrial and resource development activity intensifies. The confluence of environmental change and development pressures has led to several northern communities voicing strong concerns over the sustainability of local fisheries as well as identifying looming water crises. Given these concerns, my research program has evolved to address these fundamental concerns with a water security approach. Thus, the primary focus of my research program is to gain a better understanding of the responses of aquatic ecosystems to threats to water availability and water quality. My approach utilizes a combination of ecological, limnological, and paleolimnological theory to examine the baseline conditions of aquatic systems, and investigate alterations in biogeochemical (e.g. nutrient dynamics) and biological (e.g. distributions, food-web structure) processes over time. 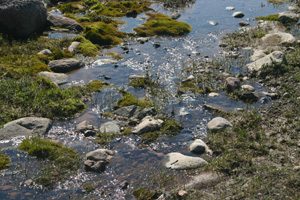 My research methods couple water isotope tracers to determine key water balance metrics of local watersheds of importance (e.g., reservoir lakes, local streams) with biomonitoring approaches that utilize biological indicators to infer aquatic ecosystem health. This allows us to demonstrate the roles of hydrological processes on water balances, infer ecosystem health, and serve to identify responses to environmental stress. For example, chironomids (Diptera:Chironomidae) can be used to identify the ecological condition of a particular system by identifying shifts in their diversity and abundance. This can be applied across multiple research themes, such as studies related to climate change, trophic response, and the examination of biological impairment due to contamination. The use of paleolimnological techniques adds a key temporal scale that utilizes indicators (such as subfossil remains of invertebrates) preserved in lake sediments to put recent alterations of ecological condition into an historic context. For example, my research has identified several species of invertebrates whose ranges were not known to extend northward beyond tree-line. The downcore analysis of subfossil chironomid remains in sediment cores is compared with present-day assemblages to interpret shifts in response to changes in environmental condition. This is carried out through the creation of transfer functions that utilize multivariate statistics and modeling of present-day biotic assemblages to associate shifts in the paleohistory of lakes to modern environmental response factors. For example, the application of a paleoclimate model I generated for the eastern Canadian Arctic found that the climate of this region has warmed 2.5°C in the last 60 years . 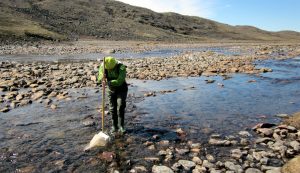 Continued and expanding human development pressures will also inherently increase the need for scientists to quantify and monitor impacts on aquatic ecological condition. Freshwater resources are intrinsically linked with development in watersheds. This is particularly true for Arctic systems, where the biological communities already exist at narrow survival thresholds due to the extreme climate. In addition, many of these systems are poorly understood, and provide an opportunity to not only examine the fundamental structure of the ecosystem, but to study the ecological response to ‘the ever changing present’.

In conjunction with the Nunavut Research Institute I have been developing methods to determine the level of biological contamination in a local stream that runs through Iqaluit, Nunavut. The stream has several point-source inputs from legacy contamination, airport runoff, industrial runoff, and residential wastes that enter the stream at numerious portions of its reach as it flows through urbanized areas of Iqaluit. This has caused a significant shift in the benthic community that we can detect with simple biomonitoring methods.