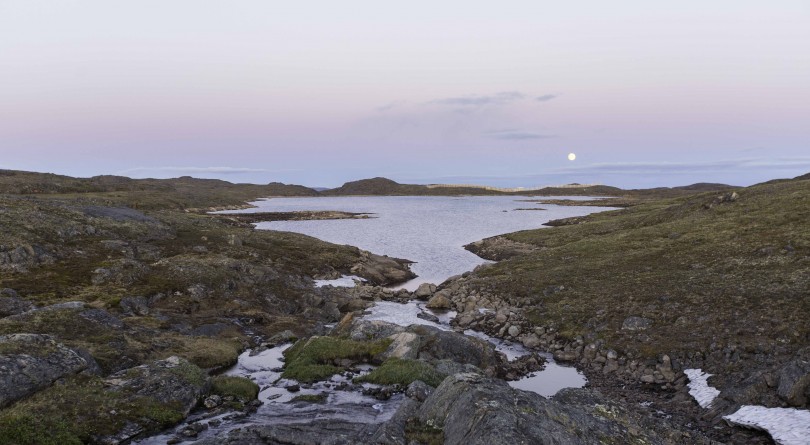 Steel pipes have been driven and the foundation poured for the biggest capital project Iqaluit has ever seen, yet uncertainty hangs in the air about whether construction of the $50-million hotel and conference centre will be halted due to a water shortage.

“We’re eager to move forward,” says Sheldon Nimchuk, director of project development and partnerships of the Qikiqtaaluk Business Development Corporation, the company behind the project. He and his team are pressing on, not only for the sake of their own organization, he says, “but for all of Nunavut.”

Arctic freshwater researcher Andrew Medeiros, an assistant professor at Dalhousie University, identified Iqaluit’s water security issues and the need for a water management strategy in 2015. The following year, Arctic Science published his finding that Iqaluit would be at risk of running out of water each winter as early as 2018 due to climate change and increased demand. He says representatives from all three levels of government, including Iqaluit city water managers, attended workshops on the findings in July 2016.

“There are things that the city should be looking at in terms of planning and development, and it’s just really frustrating, several years later, to still be talking about the same kick-the-can-down-the-road ideas,” says Medeiros. “What we did was not Mickey Mouse. It was a peer-reviewed scientific article. It’s very rare that a scientist can say with absolute certainty that this is going to happen, but that’s how basic this problem was.”

The issue came to the fore in mid-July, when city councillor Joanasie Akumalik handed out photos at a council meeting showing dangerously low water levels around Lake Geraldine. The surface had dropped more than two metres, with islands appearing in the middle of the lake for the first time. “The water used to continuously overflow over the dam into the creek or a stream coming from the lake,” says Akumalik, “but there’s no more stream.”

The city of Iqaluit says it had been working on a long-term solution for several years, but quickly switched gears this summer to look for short-term answers. It struck a task force comprised of its own officials along with consultants and officials from the Nunavut and federal governments; it is now waiting on regulatory permission to begin pumping water into Lake Geraldine from a nearby water source, says Deputy Mayor Romeyn Stevenson. The city is also repairing cracked pipes in Iqaluit’s utility-tunnel water network, plugging leaks in underground conduits and looking at ways to reduce the estimated 40 per cent of treated water that simply bleeds away. “It would be a crisis if we weren’t doing anything, but there are things being done,” says Stevenson. “I have full confidence that by mid-October we’ll have the full amount of water in Lake Geraldine that we need [for the winter].”

The long-range plan for Iqaluit’s water shortage is less concrete. The city is currently studying the feasibility of tapping into the nearby Sylvia Grinnell River as a long-term supplement for the reservoir, says Stevenson.

Climate change is affecting freshwater supply across the Arctic, which is seeing less rain and more evaporation due to warming temperatures. Unlike southern communities, where groundwater can replenish water sources, water supply in the Arctic is comparable to a bowl of water: it remains static until topped up by rain or snow. Iqaluit’s supply runs lowest in winter, when the lake is iced over and there is a fixed volume of water underneath.

What’s more, Iqaluit is a growing community: its population—now 8,000—increased by 10 per cent between 2011 and 2016, and by 40 per cent since the territory was formed in 1999. Census data from 2016 showed Nunavut had a higher birth rate than any other province or territory.

The development driving that growth shows no signs of letting up. This summer, construction began on a long-planned deep-water port, slated for completion in 2019. And the capital increasingly offers the amenities southern people enjoy, including internet service, notes Akumalik. “We still hunt seals, polar bears, caribou and fish. But it’s a growing community, and a lot of people from other communities come to Iqaluit to further their education.”

No one’s sure what will happen if the city runs out of water—it has no emergency plan in place for that eventuality. Other, smaller Arctic communities that have run out of water have shipped in bottled water at great expense, but that seems a desperate measure for a city of 8,000. Council had considered bylaw changes that would have allowed it to enter into service agreements with private companies to provide water services to commercial clients on a pay-by-volume basis. But the proposal failed amid concerns it would lead to privatization of the water supply. Recently, a newly built brewery in town had to delay its launch due to the shortage.

Meanwhile, the structural steel for the hotel and conference centre recently arrived in Iqaluit. Nimchuk is keeping a close eye on how council deals with the water issue and remains hopeful the second phase of construction will proceed. Even one month’s delay in a place like Iqaluit, where the window to ship materials is limited, can set a project back a year, he notes. And with its growing tax base, Nimchuk adds, the city should be able to afford the solutions it needs to provide essential services: “It’s a question of what side of policy and initiative do you want to be on—the can-do or the can’t-do.”