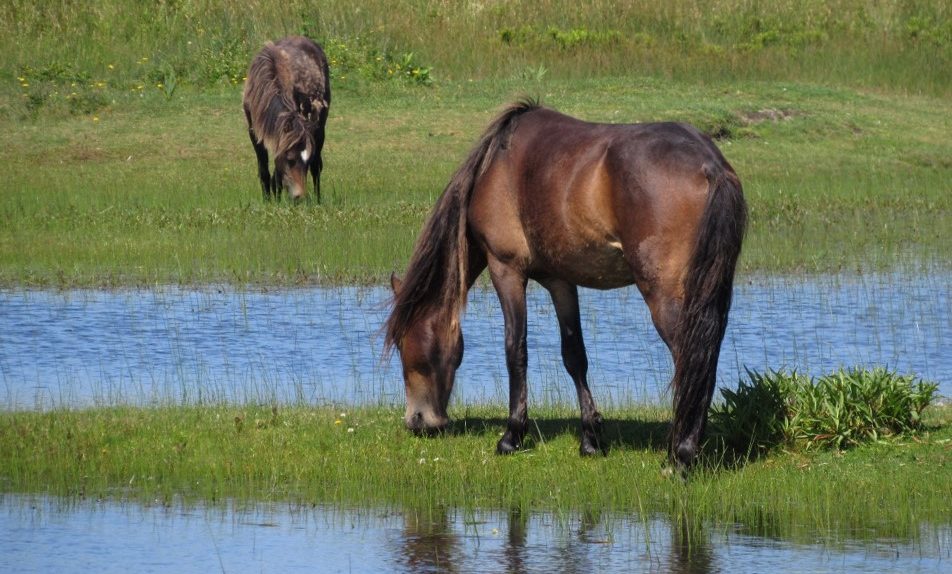 Sable Island National Park Reserve (Sable Island NPR) is an example of a coastal ecosystem that is highly influenced by environmental change and subsequent variability in weather extremes. Storm-surge activity and erosion has led to large-scale change in the surface hydrology of Sable Island NPR. This includes the loss of major freshwater sources that sustain populations of horses, birds, and many species of rare plants and invertebrates. Ultimately, the sustainability of freshwater systems of Sable Island NPR is not known, highlighting the need to not only understand the trajectory of these systems through time, but monitor their ecological integrity. 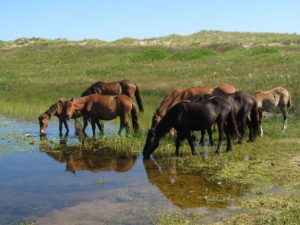 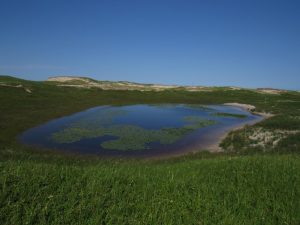 Parks Canada has a mandate to not only protect the ecological integrity of ecosystems under their jurisdiction, but to monitor these systems; this project seeks to assist with this process by developing a clear approach and methodology for monitoring of the freshwater ecosystems of Sable Island NPR as well as providing the context in which they can be assessed. The use of benthic macroinvertebrates as biological indicators for assessing the health of freshwater habitats is a common biomonitoring approach used across Canada. The basis behind their use is the ability to infer ecological condition from shifts in their abundance and diversity. Knowledge gained from monitoring benthic macroinvertebrate indicators can also be applied to detecting the influence of environmental stress at fine scales. 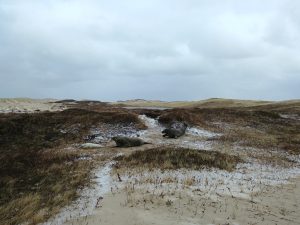 The focus of this project is to work in collaboration with Parks Canada to assess biological and environmental information for the freshwater systems of Sable Island NPR. However, a challenge for monitoring and the associated resource management and conservation planning of the freshwater habitats is a lack of baseline knowledge of how the freshwater ecosystems operate through time. Without a context, there is little to compare contemporary monitoring information to. Here, I am able to extend the development of a monitoring program for Sable Island NPR to a context that can range from centuries to millennia through the inclusion of paleolimnological[1] information into our biomonitoring approach. With the use of paleolimnological indicators, lakes can serve as storybooks of the past, and the information contained can be used to calibrate our projections for the future. This research and approach will enable us to directly address these unknowns through development of methodologies and monitoring approaches that will directly aid in conservation planning and development.

[1] Paleolimnology is the study of indicators preserved in lake sediment through time.

What we’re doing, and why we need your help.
This project is to assist with the development of a new biomonitoring measure for the freshwater ecosystems of Sable Island NPR. The approach and associated models developed will serve as a new tool that will directly assist with conservation planning for these ecosystems. It will also help us understand the sustainability of Sable Island NPR’s freshwater ecosystems in the face of ongoing environmental change.

Your contribution will be used to recruit students to Dalhousie University to assist with developing a monitoring program for the coastal freshwater ecosystems of Sable Island NPR, fieldwork and laboratory expenses for the collection and processing of samples, and equipment and consumables used for this research. Each dollar you give will be matched with three dollars from the Fathom Fund, a new funding program blending crowdfunding and research grants – but this project won’t happen unless we hit our fundraising goal. If our campaign is successful we will be able to develop a meaningful monitoring program for Sable Island NPR as well as ensure that we are able to produce meaningful information that will directly influence ongoing and future conservation of Sable Island NPR’s freshwater ecosystems.

You can help with the conservation of Sable Island National Park Reserve.
The deliverable for this project will be two-fold; the development of a biomonitoring measure for the freshwater ecosystems of Sable Island NPR, and the creation of a model to project the sustainability of these ecosystems with respect to future environmental change.

As a means of gratitude for supporting this project, we are offering unique images of the ecosystems of Sable Island NPR during our fieldwork campaign that will be available on our project website and blog, and access to our detailed field notes for the project, which will include student testimonials and project updates shared to our website and on social media.

Our partners include Parks Canada and the College of Sustainability at Dalhousie University.

Risks and challenges
This project involves the production of a novel paleolimnological model to project the sustainability of ecosystems. The scientific research conducted will form the basis of an ongoing monitoring program for Parks Canada, be demonstrated in photo, video, and scientific publications, and identify and map the sustainability of freshwater systems for Sable Island NPR in what is expected to be a highly variable future. While we expect that our models will produce a means for conservation and management planning of a highly sensitive and variable ecosystem, the project budget does not cover long-term monitoring of the system. As a result, the tools and methods we produce will be designed in a way to allow Parks Canada to maintain sampling beyond the timeframe of funding for this project. 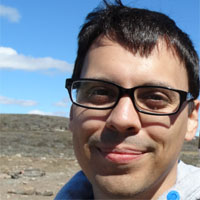 Dr. Andrew Medeiros is an expert in freshwater ecology, biogeochemical processes, and Arctic environments. His research focuses on understanding the ecological trajectory of freshwater ecosystems of the past, present, and future. By examining change from centuries to millennia he is able to make predictions and create models to project responses to environmental change. Dr. Medeiros is motivated by seeing science in action and has worked hard to build relationships and establish trust with Indigenous communities whom are at the forefront of environmental change in the North. This has allowed him to combine quantitative modeling to examine issues of fresh water quantity and quality as it applies to northern communities. The data allows researchers to conduct risk analysis for municipal water supplies, and research areas of concern for local residents. His findings have resulted in a fundamental shift in the way this knowledge is applied to water security challenges.

Dr. Medeiros has received numerous awards, internships and grants throughout his career including the W. Garfield Weston Postdoctoral Fellowship in Northern Research in 2012 and 2013. Dr. Medeiros has contributed his Arctic expertise to 24 peer-reviewed scientific publications, four technical reports, and a number of regional and international television segments. He was also a scientific advisor and contributing author for The Economics of Ecosystems and Biodiversity (TEEB), an initiative of the Arctic Council administered by the Conservation of Arctic Flora and Fauna (CAFF). Dr. Medeiros joined the College of Sustainability cross-appointed to the School for Resource and Environmental Studies at Dalhousie University in August, 2018. 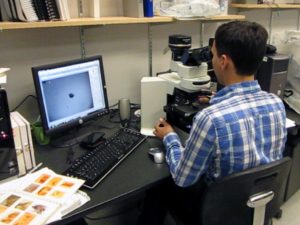 We will be working with Parks Canada to develop a biomonitoring program for Sable Island calibrated with paleolimnological baseline information. This will be carried out by collecting water, sediment, and biological samples from 13-15 freshwater ponds on Sable Island. Students and researchers will collect the samples and process them for multiple indicators of water quality. This includes counting and identifying benthic macroinvertebrates with the aid of a microscope in the WESS laboratory at Dalhousie University.

Once we have samples of the biotic composition of each pond, we will be able to combine that information with measures of water chemistry to learn how the biology of these systems relates to the aquatic environment. This will allow us to understand interactions between biological composition the environment inwhich they live. To determine if the systems are changing, the biomonitoring model will simply look to see if there is a change in these conditions and the associated biological community. As no monitoring information exists for Sable Island, this context will be provided from a paleolimnological analysis of the same biological indicators that are preserved as subfossils in the sediment history of the ponds. The resulting model will allow us to reconstruct the history of each pond, as well as provide the context to detect ecological change, as well as the basis for projections of sustainability.

In case you were wondering how we will be able to understand sustainability from insects in ponds; the use of benthic macroinvertebrates as bioindicators has long been recognized as an approach to detect environmental stress and assess environmental condition (Cairns and Pratt, 1993). The assemblage composition of invertebrate indicators can also be used to indicate long-term stability (Norden and Appelqvist, 2001), as well as quantify processes of change over time (Hodkinson and Jackson, 2005; Fortin et al., 2015). Biomonitoring allows for low-cost evaluation of the ecological condition of aquatic ecosystems through an integrated monitoring program that is easily calibrated for long-term study (Medeiros et al., 2011). The presence, absence, and/or condition of a particular biological entity is used to infer the ecological condition of an ecosystem, and shifts in these parameters can be modelled through time. The community composition of the bioindicator can reflect biological, chemical, or physical qualities of the ecosystem in which it resides, and the response of the biota to changes in the surrounding area can be an early indicator of environmental stress to the ecosystem (Medeiros et al., 2011). The ecological niche of each species varies and responds differently to environmental conditions and stress. Some taxon are more sensitive than others, such as Ephemeroptera (mayflies), Plecoptera (stoneflies), and Tricoptera (caddisflies), whereas other taxon are more tolerant, such as Simuliidae (blackflies), Tabanidae (horseflies), and Chironomidae (midges).

Norden, B. and T. Appelqvist. (2001). Conceptual problems of ecological continuity and its bioindicators. Biodiversity and Conservation, 10:779–791.